Chateau Musar: The Story of a wine Icon 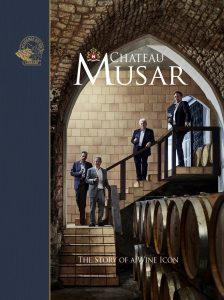 CHATEAU MUSAR – THE STORY OF A WINE ICON

Knowing about Chateau Musar takes more than a sip or a glassful, however fascinating the taste of that wine might prove to be. To know Chateau Musar takes an understanding of terroir, of natural winemaking, of human nature and of history. All of these factors have a powerful influence over the way our wine appears in the glass – how it tastes, smells, lives, breathes and changes.

The story of Musar’s survival during the Lebanese civil war of 1975 to 1990 is well documented. It was a formative time for our wine and for its creator, Serge Hochar, who was only just beginning to trust his grapes (as he famously said) to ‘become what they wanted to be’. From 1975, he had no choice. They were harvested when the shelling paused; their transit to the winery took as long as avoiding militia check-points permitted (sometimes days), and winemaking could only happen when the coast road was clear and Serge could reach the winery.

The wine he made during this time had to find its own way past the delays and disruption caused by war, and miraculously it did so. Serge called his 1982 ‘a pure wine of war’. Eighty hectares of Hochar vineyards in the Beka’a Valley became the frontline for Israeli and Syrian tanks, the grapes only harvested by chance when a break in fighting allowed the loyal Bedouin grape-pickers to dash in and collect what they could. And yet the wine was to become an elegant, mellow red full of soft fruits and pomegranate charm – Andrew Jefford called it ‘typically Musar in its enigmatic simplicity/complexity’.

And yet the war is only a tiny part of the history that makes our wines what they are. Our Lebanese heritage, charted right the way back to Phoenician times, over 4,000 years ago, has had a dramatic influence on the way the vine is grown in our land. The Phoenicians were the first to cultivate the vine professionally and to trade wine internationally; they then taught the Greeks their oenological skills, and earned the admiration of the Romans for their links to market.

Of all the history that influences us, it is the Roman temple at Ba’albek that paved our way with the most authority. As Serge said: ‘This is the only serious temple erected to Bacchus [the god of wine] anywhere in the Roman world. And they put it here, in the Beka’a. Why? Because the Romans and Greeks, the Phoenicians and Minoans, and all peoples who came before them, all knew that the Beka’a is the spiritual home of wine.’

It is Serge’s trust for his wines, rooted in history and Lebanese terroir, that has led them to light the way for the natural wine movement. He would say: ‘My wines are natural. I am the one who makes them, but I do not interfere with nature. Taste them and listen to them and you will see!’ Serge enjoyed explaining this ‘No Touch Policy’ to anyone who would listen, and would eagerly show the incredible wines – both red and white – of complex longevity that were the result. He loved to travel, and it didn’t take him long to develop a worldwide support club for Chateau Musar, with followers eager every year to find out what his new vintage would bring.

That our wines – our vintages – are shaped by time is as clear today as it ever was. Take a look at the tasting notes for 15, 20 or 30-year old Chateau Musar and you will begin to understand the elegance that it develops as it evolves in bottle. This evolution is a vitally important part of Serge’s winemaking legacy, and that we, as a family, are determined to continue.

To know Chateau Musar as it truly should be known, takes an understanding of these and many other aspects of our lives in Lebanon that we talk about for the first time in a new book – Chateau Musar, the Story of a Wine Icon – published by the Académie du Vin Library. Our book brings together the people and events that have shaped our past, it highlights our vintages (red and white, from 1951 right up to our latest release) and celebrates everything we hope for the future.

We use cookies on our website to give you the most relevant experience by remembering your preferences and repeat visits. By clicking “Accept”, you consent to the use of ALL the cookies.
Do not sell my personal information.
Cookie settingsACCEPT
Manage consent

This website uses cookies to improve your experience while you navigate through the website. Out of these, the cookies that are categorized as necessary are stored on your browser as they are essential for the working of basic functionalities of the website. We also use third-party cookies that help us analyze and understand how you use this website. These cookies will be stored in your browser only with your consent. You also have the option to opt-out of these cookies. But opting out of some of these cookies may affect your browsing experience.
Necessary Always Enabled
Necessary cookies are absolutely essential for the website to function properly. These cookies ensure basic functionalities and security features of the website, anonymously.
Functional
Functional cookies help to perform certain functionalities like sharing the content of the website on social media platforms, collect feedbacks, and other third-party features.
Performance
Performance cookies are used to understand and analyze the key performance indexes of the website which helps in delivering a better user experience for the visitors.
Analytics
Analytical cookies are used to understand how visitors interact with the website. These cookies help provide information on metrics the number of visitors, bounce rate, traffic source, etc.
Advertisement
Advertisement cookies are used to provide visitors with relevant ads and marketing campaigns. These cookies track visitors across websites and collect information to provide customized ads.
Others
Other uncategorized cookies are those that are being analyzed and have not been classified into a category as yet.
SAVE & ACCEPT